French forensic police officers gesture to pedestrians as they take images while searching a vehicle following a car crash in the southern Mediterranean city of Marseille on August 21, 2017. At least one person has died in Marseille after a car crashed into people waiting at two different bus stops in the southern French port city, police sources told AFP, adding that the suspected driver had been arrested afterwards. The police sources, who asked not to be identified, did not say whether the incident was being treated as a terror attack or an accident.

At least one person was killed and another injured in Marseille on Monday when a car crashed into two bus shelters in different parts of the French city, police said.

Police advised the public to avoid the Old Port area where the driver, a 35-year-old man, was arrested.

“At the moment we have no information on the motives of this individual,” a police official told Reuters.

The incident comes as Spanish police hunt for the 22-year-old driver who plowed a van into a crowd in Barcelona on Thursday. 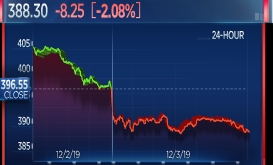 Bank of England holds interest rates ahead of snap election

Assembling a T-72B3 battle tank at the Uralvagonzavod factory, a Rostec subsidiary, developing and producing …