Trump lashes out Sen. Lindsey Graham for comments on Charlottesville 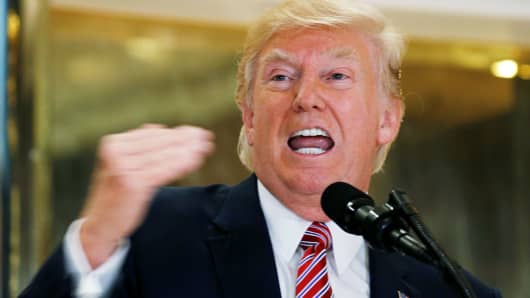 President Donald Trump answers questions about his responses to the violence, injuries and deaths at the “Unite the Right” rally in Charlottesville as he talks to the media in the lobby of Trump Tower in Manhattan, New York, August 15, 2017.

In a tweet on Thursday, Trump said “publicity seeking” Graham incorrectly stated that the president said “there is moral equivalency between the KKK, neo-Nazis & white supremacists. … and people like Ms. Heyer.”

Heather Heyer was killed after she was struck by a car driven into a crowd of people who were protesting a white nationalist rally in Virginia.

In a statement on Wednesday, Graham said Trump “took a step backward by again suggesting there is moral equivalency between the white supremacist neo-Nazis and KKK members who attended the Charlottesville rally and people like Ms. Heyer. I, along with many others, do not endorse this moral equivalency.”

At a heated news conference on Tuesday, Trump doubled down on his initial response, blaming “both sides” for the violence.

In a separate tweet, Trump took a shot at the “fake news” media, saying mainstream media is distorting “what I say about hate, bigotry, etc. Shame!”

Previous Review: Grizzly Bear Staves Off Despair With Beauty on ‘Painted Ruins’
Next Meet the Creator of Beyoncé’s Crown From the ‘7/11’ Video

Young women are making more of their families’ financial decisions

Futures up slightly, S&P 500 at record, Target jumps on earnings