Americans by a narrow margin oppose impeachment hearings to remove President Donald Trump from office, according to the latest CNBC All-America Economic Survey.

But the CNBC poll of 800 Americans nationwide conducted last week found a significant shift where fewer Americans are opposed to impeachment. It also found a large decline in the president’s overall and economic approval ratings.

The survey found 47% opposing impeachment hearings and 44% approving. The difference is within the poll’s 3.5% margin of error.

The results are much closer than when an NBC/Wall Street Journal poll asked the same question in December 2017, finding 41% approving of impeachment hearings and a majority 54% disapproving.

“The American people are not jumping towards impeachment,” said Micah Roberts, a partner in Public Opinion Strategies who serves as the Republican pollster for the CNBC survey. “They are cautiously moving away from opposing impeachment.” 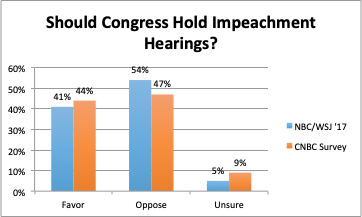 Jay Campbell, partner in Hart Research, the Democratic pollster for CNBC, agreed that what’s been revealed so far “is not enough” to spur public opinion toward majority support of impeachment. But Campbell said the change between the two polls is statistically significant and puts the president “in a precarious situation.”

The poll shows that 88% of Republicans oppose impeachment, compared to 76% of Democrats who favor it. Independents are split about evenly, with 42% favoring impeachment and 43% opposing.

The CNBC All-America Economic Survey also found a substantial drop in President’s Trump overall approval rating, hitting the lowest level of his presidency. Just 37% approve of President Trump’s handling of his job and 53% disapprove. The president’s “net approval” (approval minus disapproval) dropped to -16 points, two points worse than the previous low of his presidency in June and September 2017. The decline results substantially from lost support among Independents.

To be sure, the change in both the approval and disapproval numbers compared with May are both within the poll’s margin of error. But they amount to a change from net approval of -10 to -16, a potentially significant shift.

The president’s economic approval numbers also took a hit, declining to 42% from 48% in the May CNBC survey. Fifty percent of Americans now disapprove of President Trump’s handling of the economy, up from 43% in May and the largest economic negative rating of his presidency. It’s only the second time since taking office that a CNBC survey found more Americans disapproving of his handling of the economy than approving.

The CNBC poll found that 45% of the public is concerned impeachment will have a negative effect on the stock market, and 40% are worried about the effect on the economy. Just 23% believe it will hurt their personal financial situation. Republicans are twice as concerned as Democrats about the potential economic impact of impeachment. 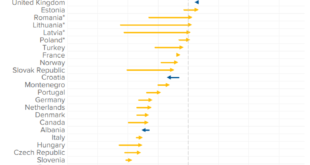 Each NATO country’s financial contribution to the military alliance