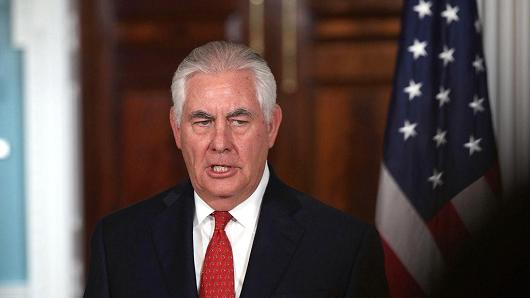 U.S. Secretary of State Rex Tillerson speaks to members of the media at the State Department October 13, 2017 in Washington, DC.

The U.S. State Department said on Thursday it was suspending security assistance to Pakistan until Islamabad takes action against the Afghan Taliban and the Haqqani network, which Washington believes is destabilizing the region.

State Department spokeswoman Heather Nauert said she could not provide a dollar value for the suspended aid because the administration was still calculating the types of aid affected by the decision. She said some of the aid could still be permitted if Islamabad takes decisive action against the groups.

“Today we can confirm that we are suspending … security assistance only to Pakistan at this time until the Pakistani government takes decisive action against groups including the Afghan Taliban and the Haqqani network. We consider them to be destabilizing the region and also targeting U.S. personnel,” she told a regular news briefing.

The 2020 election race remains tight between Trump and Biden

© 2020 CNBC LLC. All Rights Reserved. A Division of NBCUniversal Data is a real-time …